Get fresh music recommendations delivered to your inbox every Friday.
We've updated our Terms of Use. You can review the changes here.

by Projekt Gestalten + The Princess of Death 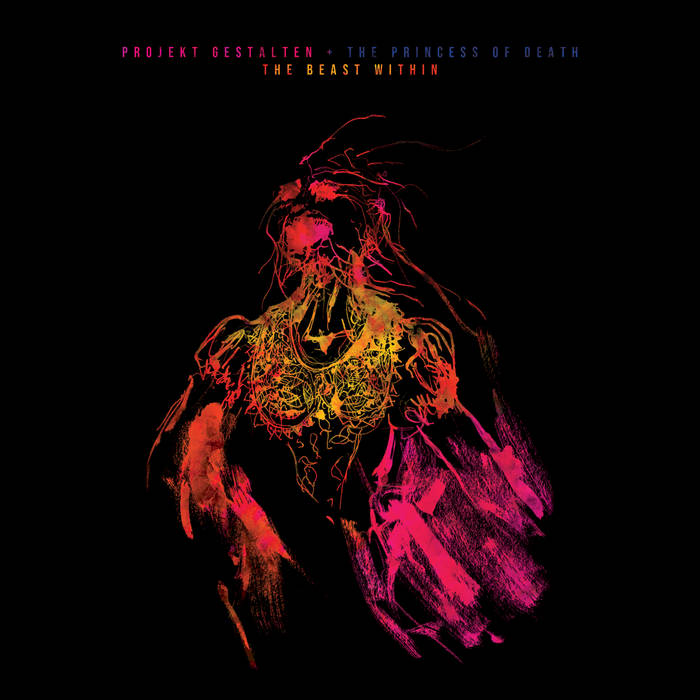 “The Beast Within” is the new album by Brazilian artist, Diego Garcia; exploring gender identities within contemporary electronic music. The artist uses two of their distinguished artistic identities: The Princess of Death, her feminine identity - where there is an exploration of a more introspective and corrosive textures commonly associated with patriarchal values; and Projekt Gestalten, his masculine identity - where melodic and hypnotic sounds, often associated with matriarchy, are emphasized.

In this project, Diego’s aim is to dichotomize their gender identities inspired by a point-and-click adventure game from the 90’s called “Gabriel Knight 2 - The Beast Within”. The story was written by American game designer, Jane Jensen with original music composed by her husband, Robert Holmes. The protagonist is on the trail of a strange wolf, murderer of a little girl. Gabriel was asked to take care of this evil and suspects that this case is paranormal in nature. Together with his assistant, Grace Nakimura, he discovers the dark truth behind the history of Bavaria. The gameplay alternates between Gabriel and Grace and its storyline is only explored indirectly by Diego – as it is deeply connected with their childhood and formative years and still remains as one of their all-time favorite games.

Just like in the gameplay, Diego alternates between both of their feminine and masculine identities in order to create original pieces of music. As Projekt Gestalten, an array of dance tracks are functionally presented; ranging from melodic and trippy to club-ready driving techno; dissecting a more rational aspect of the game's storyline. In contrast, The Princess of Death goes into an ambient and experimental approach; exploring liturgical themes that includes a dark and dystopian cover of the traditional gospel song “When The Saints Go Marching In”, a song that is featured throughout the whole Gabriel Knight franchise in many different versions. In the end, the gender polarizing concept is extrapolated and both aliases are finally merged into one another; leading to the Gestalt principle, alluded in Diego's main alias, being fully applied as a whole.

The project’s ultimate goal is to challenge preconceived notions of how a specific gender should sound/behave and to explore light/dark, sacred/secular, good/evil, male/female using the Gabriel Knight universe as the blueprint: a gender-neutral game where the player is forced to assume a feminine and a masculine role in order to navigate through the story. Additionally, the game was written by a woman (a rational aspect often associated with masculinity); while her husband composed the music (an emotional facet traditionally related to femininity). All of these ideas are perfectly aligned with Diego’s own trajectory as an artist and their distinct artistic identities featuring distorted gender values - which comes full circle in this project.

The album is available digitally and also on a heavy-weight 180g double vinyl edition. Part of the profits from the digital sales will be donated to queer organizations fighting homophobia.

All Tracks Arranged and Produced by Diego Garcia
Mastering by Inland

Bandcamp Daily  your guide to the world of Bandcamp